A new workstation for nomadic employees

Spotting a shift in job structures and the diminishing status of the office, Design Academy Eindhoven graduate Shay Raviv designed Hotel Travail  ­– a new workspace concept for nomadic employees. The Raviv is focused on developing socio-cultural concepts that place the individual at the centre of the process.

Hotel Travail is a multifaceted station for digital nomads. It is a conceptual project that places different places and services, such as a reference fountain, Wi-Fi shelter, a debate carousel, and the workcycle into existing hospitality locations around the world.

Raviv was prompted to design Hotel Travail by the rise of the digital nomad or the nomadic employee, which has gained popularity alongside the new “gig economy”. The new economy increasingly sees people work away from traditional offices as self-employed independent contractors. There is a lot of debate over whether the gig economy is overhyped or exists at all.

Raviv doesn’t buy the idea that the gig economy has been overhyped. She predicts that the work environment is gaining momentum and developing in two ways. The first is towards nomadic, independent, and mobile workspaces – where the office will be where the worker is. The second is towards a new work landscape where institutes that combine working with learning, making, producing, relaxing and enjoying will arise.

With fewer and fewer people working in life-long jobs or in fixed workplaces, I was inspired to offer the roving, job-hopping worker a sense of stability and safety,” – Shay Raviv.

People who travel and work at the same time would have the possibility to enter different stations around the world and stay there for a temporary period surrounded by other workers-on-the-go.

Raviv presented a physical installation of Hotel Travail during the Dutch Design Week. Visitors were able to within the stations, work on their laptops and talk. 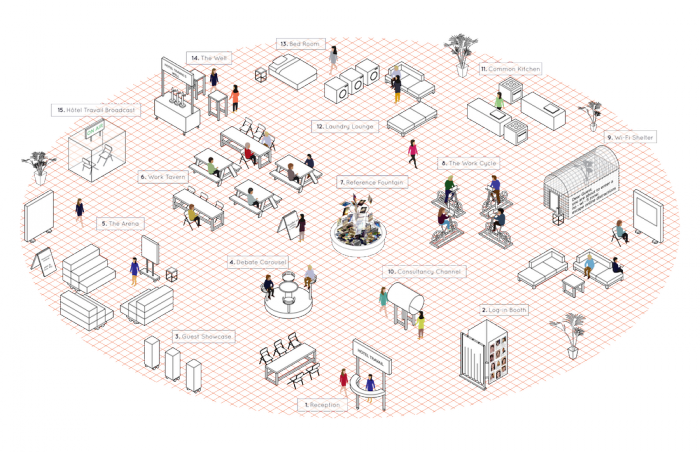 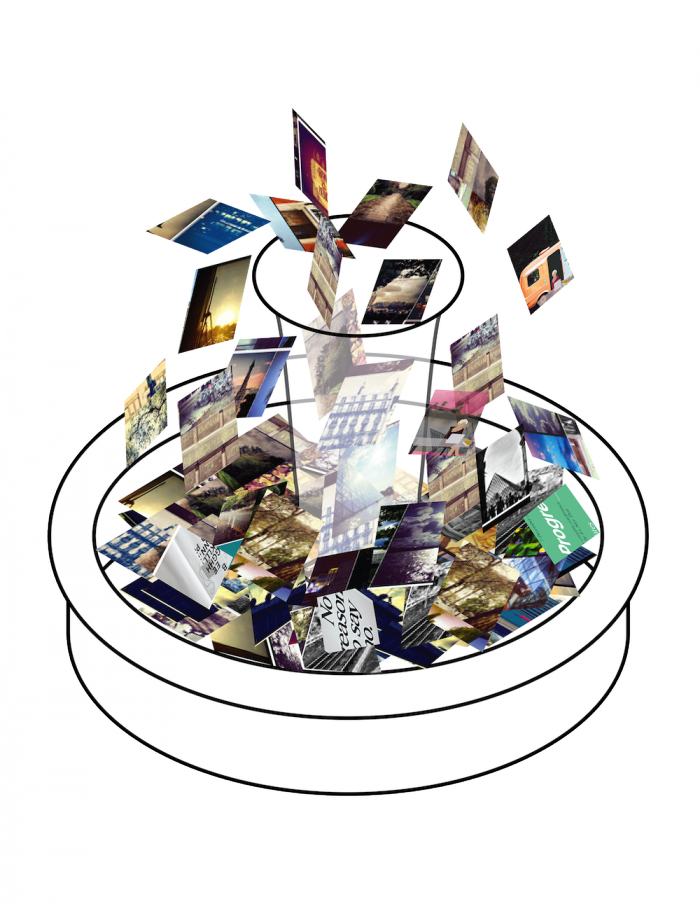 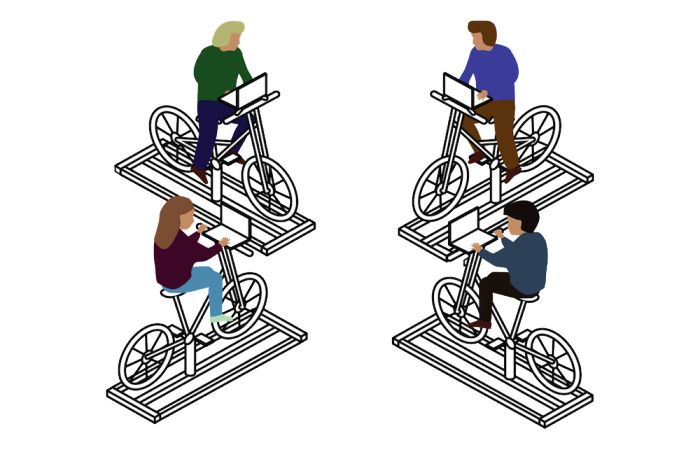 The Workcycle helps to drive and encourage workers on the move and adds movement to sitting and working behind a computer. 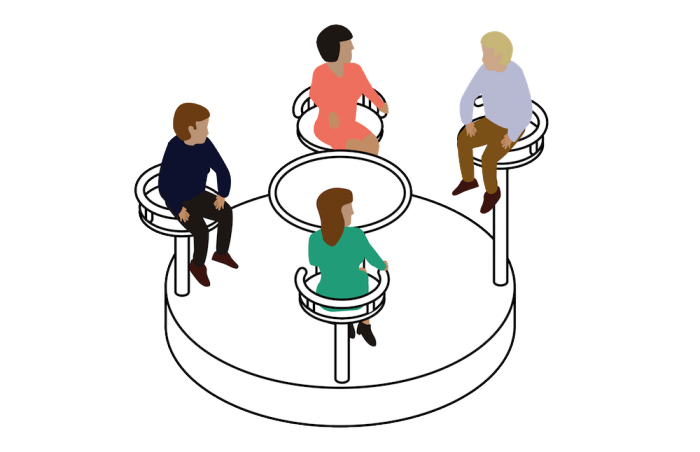 Debate Carousel is a facility for a discussion. 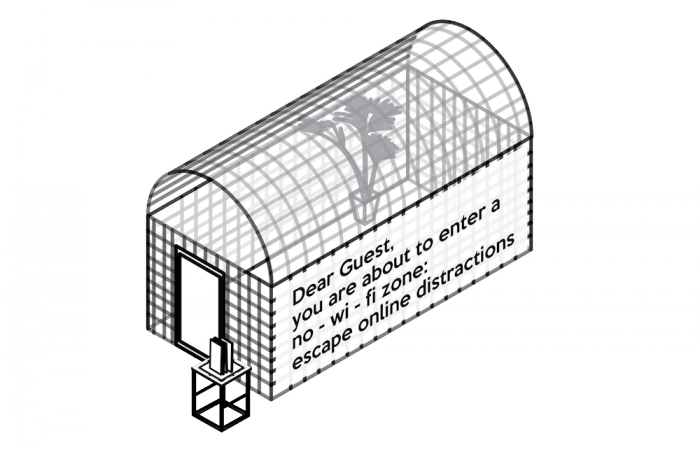 The Wi-Fi Shelter allows the nomadic employees to escape from online distractions and to talk to others without constantly checking messages and emails. 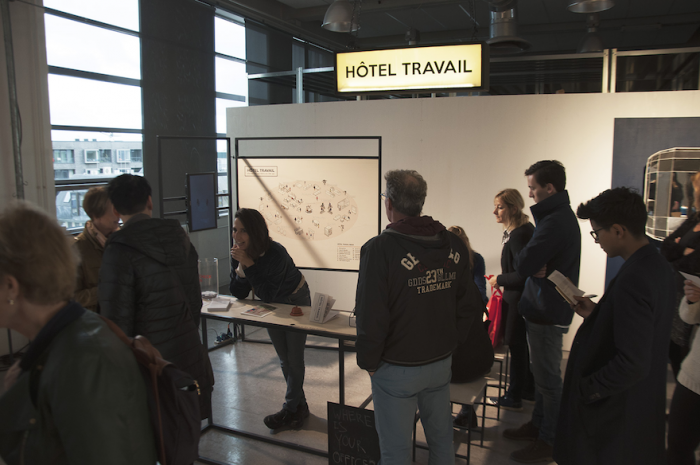 A physical manifestation of HÔTEL TRAVAIL at Dutch Design Week. 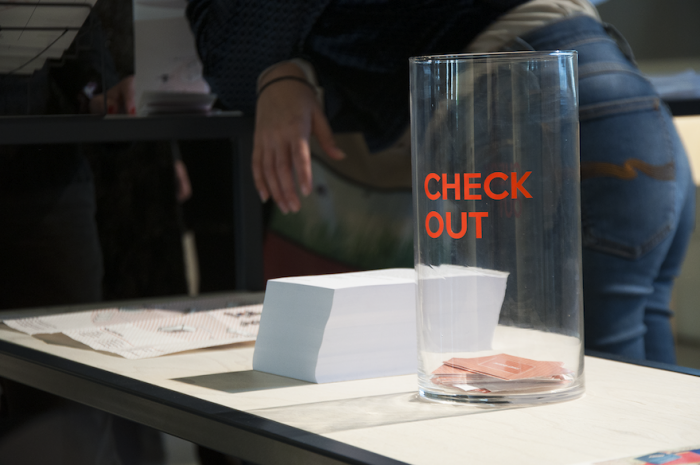 A new material made from orange peels could remove mercury pollution