Heaven is wide open spaces – at least, it is for most people, according to a massive new data set of happiness in Canada.

A team of happiness researchers at the Vancouver School of Economics and McGill University recently published a working paper on the geography of well-being in Canada.

They compiled 400,000 responses to a pair of national Canadian surveys, allowing them to parse out distinctions in well-being at the level of more than 1,200 communities representing the country’s entire geography.

They were able to cross-reference the well-being responses with other survey data, as well as figures from the Canadian census, to see what sorts of characteristics were associated with happiness at the community level.

Are happier communities richer, for instance? Are the people there more educated? Do they spend more time in church?

Their chief finding is a striking association between population density – the concentration of people in a given area – and happiness.

When the researchers ranked all 1,215 communities by average happiness, they found that average population density in the 20 percent most miserable communities was more than eight times greater than in the happiest 20 percent of communities.

You can see that effect in the map below, which shows the region around the city of Toronto. Densely populated areas like Toronto, Hamilton and Kitchener stand out as islands of relative unhappiness in a sea of satisfaction in the hinterlands. 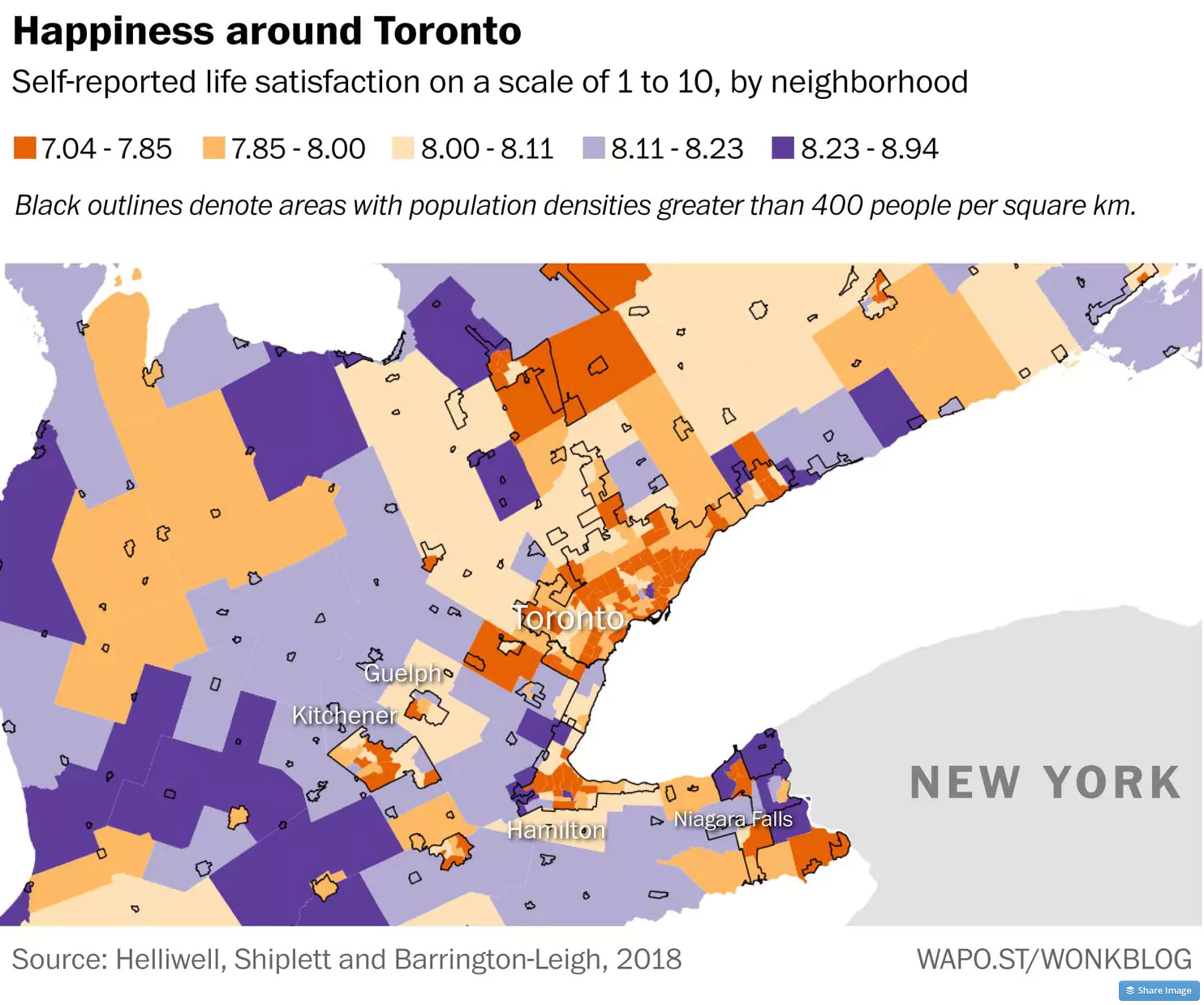 The happiness measure is derived from a survey question that asks responses to rate “how satisfied” they are with their lives, on a scale from 1 to 10.

Across Canada, community-level average responses to this question range from 7.04 to 8.94.

This may not seem like a wide range of difference, but Canadians rarely offer self-assessments outside this range; in a typical year just five percent of Canadiansrate their satisfaction below a 5, for instance.

It’s useful to think of this narrow spectrum of responses as representing the entire continuum of Canadian happiness. Hence, the study’s authors note that even small differences in the absolute score are highly statistically significant. 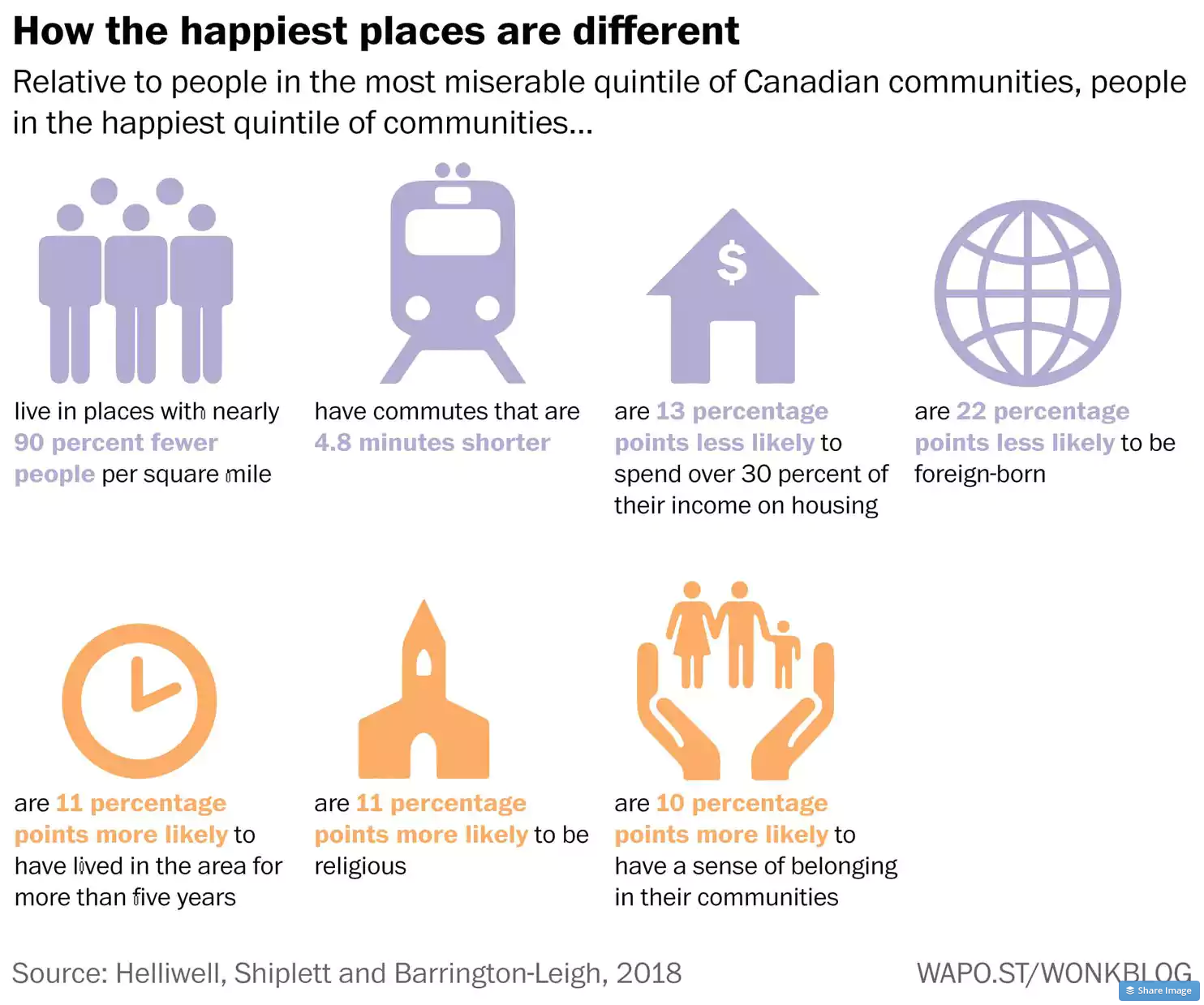 It may seem contradictory that greater happiness is correlated with both lower population density (implying fewer interpersonal interactions) and a greater sense of “belonging” in one’s community (implying stronger social connections).

But a significant body of research shows that having a strong social network is key to well-being.

Some studies indicate that small towns and rural areas are more conducive than cities to forming strong social bonds, which would explain some of the greater sense of belonging observed in the happiest Canadian communities.

Perhaps even more surprising are the factors that don’t appear to play a major role in community-level differences in happiness: average income levels and rates of unemployment and education.

People may move to cities for good-paying jobs, but the Canadian study strongly suggests it’s not making them any happier.

These findings comport with similar studies done in the United States, which have revealed a “rural-urban happiness gradient“: The farther away from cities people live, the happier they tend to be.

A miserable city dweller who moves to the country might simply become a miserable country dweller, in other words.

However, it’s clear that there’s something about small towns and rural life that’s associated with greater levels of self-reported happiness among people who live in those places.

The strength of the Canadian study is that it parses out these distinctions at an uncommonly fine level of geographic detail.

This article was originally published by The Washington Post.