The future of shopping is . . . second life on acid?

When Victor Gruen invented the shopping mall in 1956, he wanted to give suburban citizens a sorely needed third place to socialize and shop. Today, malls have been usurped by e-commerce. And while the ease of one-click shopping fulfills the consumerist part of Gruen’s equation, it ignores the equally therapeutic leisure element. 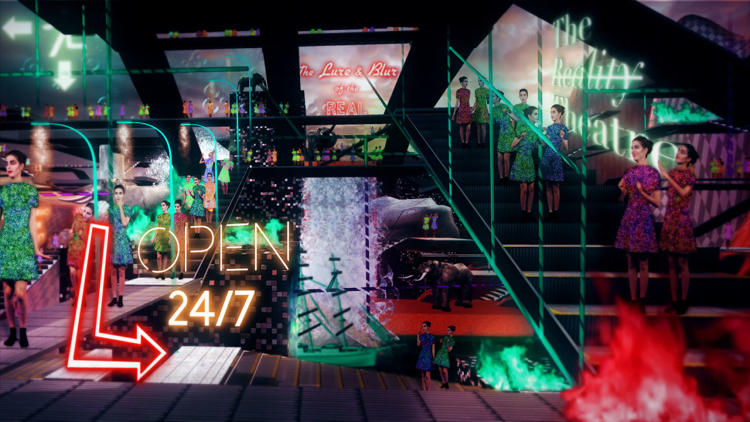 Allison Crank, a designer and filmmaker based in Eindhoven, thinks that virtual reality is one way to restore the social side of things.

“The Reality Theater: Shopping In the Ludic Century,” Crank’s master’s thesis, proposes a virtual mall in which players meander through a psychedelic landscape of neon signs, labyrinthine escalators, bubbles (!), and animals.

Crank calls it “a new third place for the public to meet, perform, indulge, and play in immersive environments.” I call it Second Life on acid. The designer envisions her concept working with augmented reality devices like Microsoft’s Hololens or Magic Leap to superimpose this virtual world over our own. For example, if someone were commuting, he or she could strap on an augmented reality headset and participate in the Reality Theater.

“If I were finishing my day at work and heading home on the train, the waiting platform to inside the train could become the mall or store,” Crank says. “And if during my train ride, I decided to shop for a bespoke item at one of the stores, my view from inside the train would transfer from the ‘mall’ stage into the store, where I could interact with the designer and together create a bespoke item that I would then go on to purchase. While I’m in the ‘store,’ I can invite my friends to virtually shop with me, help me with my decision, or explore the store’s virtual stage.”

Crank acknowledges that it would take quite a few technological advancements to achieve this outcome. “What’s most important is that the experience is led and directed around the wants and needs of each consumer, who in the end is a co-designer in the creation of their item,” she says. While this Day-Glo spectacle of a mall looks downright terrifying, the root concept—a virtual shop—doesn’t seem that far off. Fashion brands are already experimenting with VR experiences and interactive boutiques. Oculus Rift with your khakis, anyone?

SprayPrinter offers a new way to paint your walls