If you work in the Philadelphia Navy Yard—a 1,200-acre industrial site turned office campus—your lunch break might include a game of ping pong or bocce ball. You could stretch your legs on a 1/5-mile running track, snag a bite from food trucks, sprawl out on a lush lawn, or catch some shut-eye on a hammock. This playland comes courtesy of an ambitious plan from developer Liberty Property Trust and landscape architecture firm James Corner Field Operations to inject urban attributes into what’s usually thought of as a highly un-urban space. 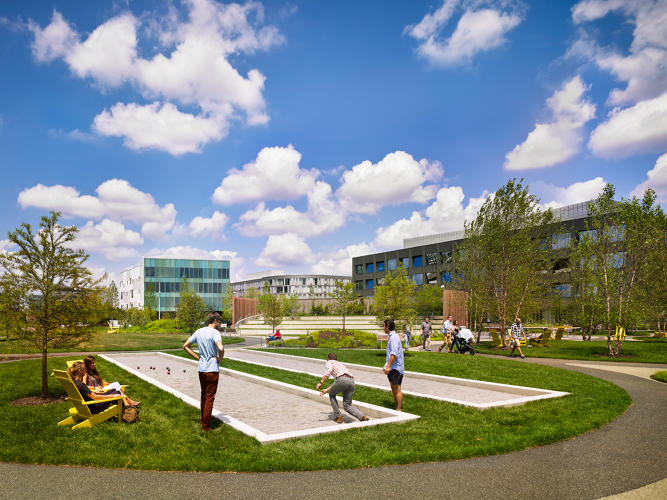 The Navy Yard Central Green is part of a master plan originally conceived by Robert A.M. Stern. About 15 years ago, the sprawling site began its transformation from an underused industrial site to a thriving commercial hub built around the principles of mixed-use development, historic preservation, inventive new architecture, and great public spaces. Today, over 10,000 people work in the area, which is home to organizations like Urban Outfitters, GlaxoSmithKline, and about 140 other companies. Soon, residential development will join the office buildings. 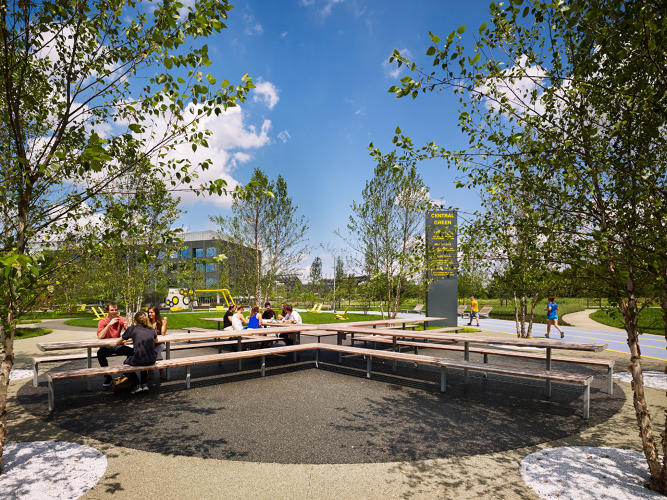 “Not only has the Navy Yard moved beyond the bland office-park model by creating a formal street plan with real sidewalks, but it also is producing some of the best architecture in Philadelphia,” writesPhiladelphia Inquirer architecture critic Inga Saffron. The site recently made headlines after it announced a a forthcoming office building byDanish starchitect Bjarke Ingels and the Central Green (which is adjacent to the BIG project’s building site) is a key feature of this new vision of an office campus.

“We really wanted to create this work-play environment, which was part of Liberty Property Trust’s whole vision for this part of the Navy Yard,” says Kimberly Cooper, the associate at Field Operations who oversaw Central Green’s construction. “We knew it was going to be for the 11,000 people who work at the Navy Yard today, but it would also be for the residents living there in the future. It’s not just a work area; it’s a new neighborhood for Philadelphia that’s urban, modern, and flexible.” 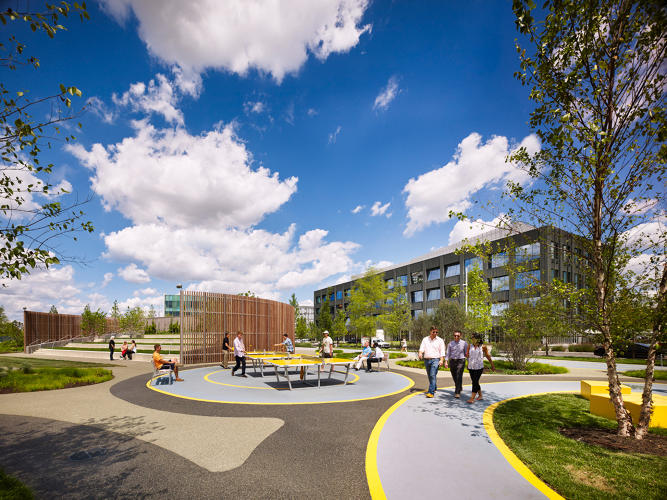 The overall plan is organized into smaller zones of activity, kind of like a rooms of a house. Each has a clear function, but there’s the opportunity to reprogram them if need be. For example, there’s a bocce court in the center. A massive outdoor table shaped like an “x” sits adjacent and could be used to hold group meetings or just as a spot for lunch. One of the businesses that’s currently near the Central Green is very fitness oriented—there’s a gym in their building’s lobby—and so Field Operations designed a space with bars that can be used for TRX training. 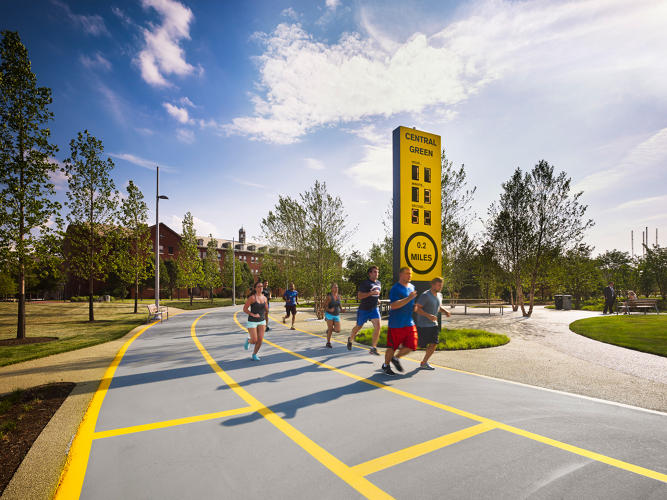 “We thought about what we could do to activate the space and how could we make this a place where employees or residents would want to come and socialize, or have meetings and conferences,” Cooper says. “Liberty had the foresight to say, if we create a great public space, we’ll be able to attract great tenants.”

Custom outdoor furniture from the European company mmcité outfits the “lounge lawn” and is also scattered throughout the park. An amphitheater enveloped in a slatted wood wall offers space for special events. Field Operations also carved out a paved section for food trucks to park.

One of the smart things about the park is that it offers an outdoor social space for serendipitous encounters, a key feature of design for innovation. 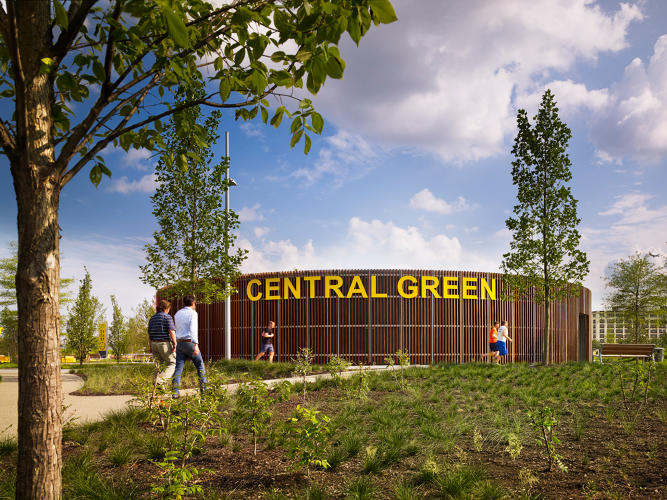 While the amenities and elements for human use are laudable, so are the environmental attributes. There are over 200 new trees planted in the park along with native flora and grasses. Permeable paving helps retain storm water on-site and there’s a wet meadow designed to naturally filter runoff. In fact, the overall design of the space relates to the site’s historical landscape. Hundreds of years ago, it was a marsh with pockets of plants and water. The circular pods are a nod to Mother Nature’s own design.

Cooper hopes the space evolves over time to become continually used from sun up to sundown and serve as the heart of the new community Liberty is building. “It’s a park within a growing neighborhood,” she says. The Washington Post recently called prototypical suburban office parks the new American ghost town, but Central Green offers a new paradigm: a park built with people in mind.

“Office parks today could be more urban in their feel,” Cooper says. “Not just a place where you go and work but also where you want to linger, like neighborhoods in cities where you live, work, and shop and there are kids, families, a mix of ages and backgrounds—a rich neighborhood.”

This Is What Will Happen When You Eat Avocados Every Day

Workplace wellness: 7 workplace design experts weigh in on the next big thing