Neill, an Australian designer now based in London, constructed the table from tiny pieces of plastic that have been salvaged from beaches around the world, including Tasmania, Hawaii and Cornwall. 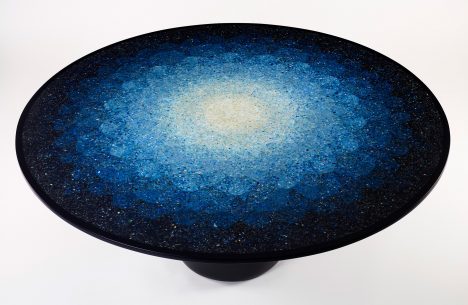 Each piece was separated by colour before being processed and arranged into a plastic composite. The visual effect is similar to terrazzo flooring, which is usually made from marble or granite.

Using chips of blue, white, black, brown and green plastic, the table’s speckled top evokes the colours of the ocean.

Its mottled colours fan out from the centre in a gradient, going from mostly white in the centre to black at the edge. 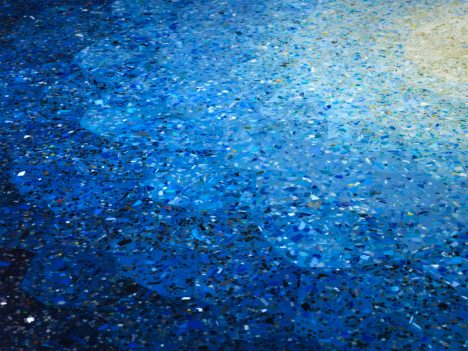 The Gyro table was specially commissioned for the London Design Biennale 2016, which centres around the theme of Utopia by Design. Neill is using this theme to draw attention to the potential of a material that is currently polluting the world’s oceans.

“I saw marine plastic as a commodity, not waste,” Neill told Dezeen. “In this way I hope to, in the words of Dr Erik van Sebille, ‘return plastic to the economy and free it from the environment’.”

Neill was driven to work with ocean plastic after observing it washed up on the once pristine beaches of Bruny Island, in his native Tasmania. 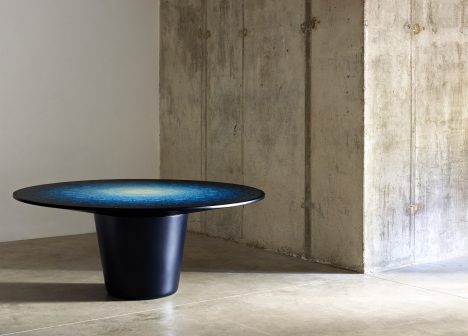 “I was saddened to see how a place so remote, which I remembered as being postcard-picturesque, was now completely ruined by the plastic litter which had drifted from other part of the world as well as Australia,” continued the designer.

“This was when I started thinking about how I could use plastic as a design material and also to proactively learn about the global scale of the problem of marine plastic.”

Neill worked with an international community of environmentalists to collect the plastic pieces from their local seashores. To turn it into a useable material, he collaborated with scientists and other designers.

The final process sees the pieces of plastic cleaned and sterilised before being mixed with resin and ocean plastic aggregate to create a speckled composite material. 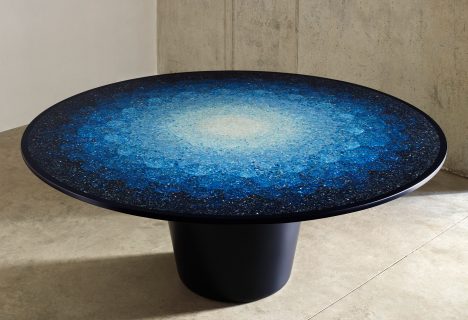 The ocean plastic chips are carefully and evenly spaced within this mix, giving the composite a terrazzo-like effect. Small slabs of the composite are CNC cut and inlaid into the table.

Neill is now aiming to refine the material so he can be apply it on an industrial scale in future projects.

Gyro is not the designer’s first foray into reclaimed materials. His Remix chaise longue, created in 2008, was carved from layers of recycled plastics and plywoods. 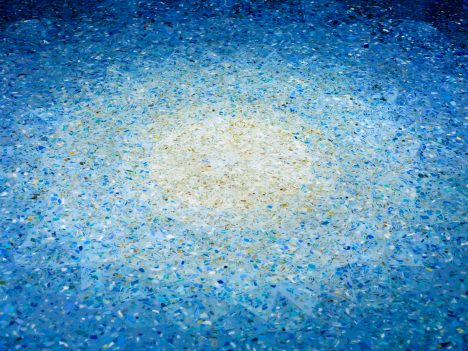 Other projects by the designer – who founded the furniture design studio Made in Ratio – include the stackable, solid wood Alpha chair and Glacier, a chaise cast from 135 litres of clear glass.

Neill will present his Gyro table within the Australian pavilion at theLondon Design Biennale, held from 7 to 27 September 2016 at Somerset House.

Architects and designers from 37 countries are taking part in the major exhibition, which is themed Utopia by Design to mark the 500th anniversary of the publication of Thomas More’s Utopia. 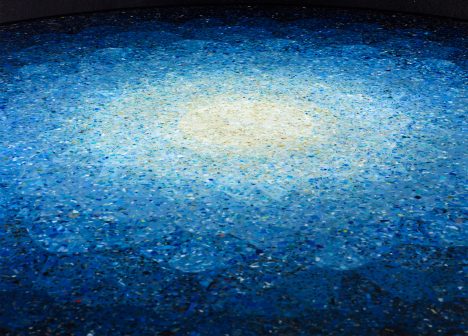 The Australian pavilion, titled Plastic Effects, will present the Gyro table alongside a “multi-sensory and immersive” display combining audio and video.

According to Neill, the display will explore human impact on the natural world by “evoking the turning of the gyres, which carry plastic waste across the world”.